Independent Component Analysis is a signal processing method to separate independent sources linearly mixed in several sensors. For instance, when recording electroencephalograms (EEG) on the scalp, ICA can separate out artifacts embedded in the data (since they are usually independent of each other).

This page intends to explain ICA to researchers that want to understand it but only have a weak background both in matrix computation and information theory. My explanations will be as intuitive as possible and based on practical examples from Matlab.

You may also look at this series of video (in particular video 3) which detailed explanation on how to apply ICA to EEG data.

ICA is a technique to separate linearly mixed sources. For instance, let’s try to mix and then separate two sources. Let’s define the time courses of 2 independent sources A(top) and B(bottom) (see the Matlab code) 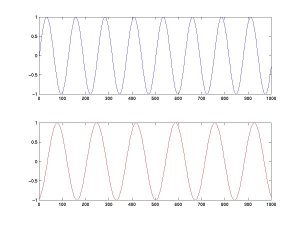 We then mix linearly these two sources. The top curve is equal to A minus twice B and the bottom the linear combination is 1.73*A +3.41*B. 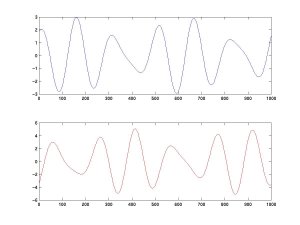 We then input these two signals into the ICA algorithm (in this case, fastICA) which is able to uncover the original activation of A and B. 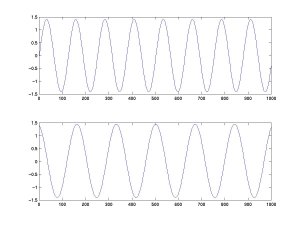 Note that the algorithm cannot recover the exact amplitude of the source activities (we will see later why). I advice you to try this with different degree of noise and see that it’s quite robust. Note also that, in theory, ICA can only extract sources that are combined linearly.

We will now explain the preprocessing performed by most ICA algorithms before actually applying ICA.

A first step in many ICA algorithms is to whiten (or sphere) the data. This means that we remove any correlations in the data, i.e. the different channels (matrix Q) are forced to be uncorrelated.

Why do that? A geometrical interpretation is that it restores the initial “shape” of the data and that then ICA must only rotate the resulting matrix (see below). Once more, let’s mix two random sources A and B. At each time, in the following graph, the value of A is the abscissa of the data point and the value of B is their ordinates. 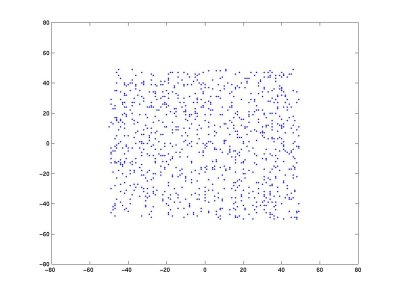 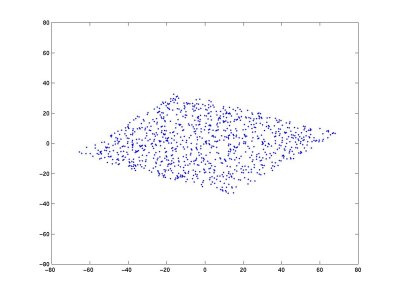 Then if we whiten the two linear mixtures, we get the following plot 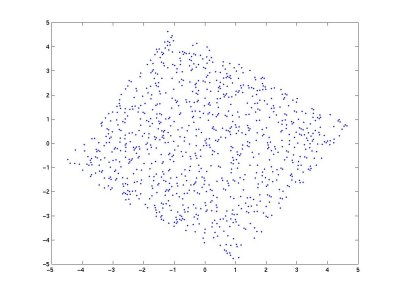 the variance on both axis is now equal and the correlation of the projection of the data on both axis is 0 (meaning that the covariance matrix is diagonal and that all the diagonal elements are equal). Then applying ICA only mean to “rotate” this representation back to the original A and B axis space.

Intuitively you can imagine that ICA rotates the whitened matrix back to the original (A,B) space (first scatter plot above). It performs the rotation by minimizing the Gaussianity of the data projected on both axes (fixed point ICA). For instance, in the example above,

The projection on both axis is quite Gaussian (i.e., it looks like a bell shape curve). By contrast the projection in the original A, B space far from gaussian.

By rotating the axis and minimizing Gaussianity of the projection in the first scatter plot, ICA is able to recover the original sources which are statistically independent (this property comes from the central limit theorem which states that any linear mixture of 2 independent random variables is more Gaussian than the original variables). In Matlab, the function kurtosis (kurt() in the EEGLAB toolbox; kurtosis() in the Matlab statistical toolbox) gives an indication of the gaussianity of a distribution (but the fixed-point ICA algorithm uses a slightly different measure called negentropy).

The Infomax ICA in the EEGLAB toolbox (Infomax ICA) is not as intuitive and involves minimizing the mutual information of the data projected on both axes. However, even if ICA algorithms differ from a numerical point of view, they are all equivalent from a theoretical point of view.

We dealt with only 2 dimensions. However ICA can deal with an arbitrary high number of dimensions. Let’s consider 128 EEG electrodes for instance. The signal recorded in all electrode at each time point then constitutes a data point in a 128 dimension space. After whitening the data, ICA will “rotate the 128 axis” in order to minimize the Gaussianity of the projection on all axis (note that unlike PCA the axis do not have to remain orthogonal).
What we call ICA components is the matrix that allows projecting the data in the initial space to one of the axis found by ICA. The weight matrix is the full transformation from the original space. When we write

X is the data in the original space. For EEG

S is the source activity.

In fMRI: An artifact topography or the topography of statistically maximally independent pattern of activation

W is the weight matrix to go from the S space to the X space.

Now the rows of W are the vector with which we can compute the activity of one independent component. To compute, the component activity in the formula S = W X, the weight matrix W is defined as

For instance to compute the activity of the second source or second independent component (in a matrix multiplication format), you may simply multiply matrix X (see beginning of paragraph) by the row vector

Now you have the activity of the second component, but the activity is unitless. If you have heard of inverse modeling, the analogy with EEG/ERP sources in dipole localization software is the easiest to grasp. Each dipole has an activity (which project linearly to all electrodes). The activity of the Brain source (dipole) is unitless unless it is projected to the electrodes. So each dipole create a contribution at each electrode site. ICA components are just the same.
Now we will see how to reproject one component to the electrode space. W-1 is the inverse matrix to go from the source space S to the data space X.

In Matlab you would just type inv(W) to obtain the inverse of a matrix.

As a conclusion, when we talk about independent components, we usually refer to two concepts

From the preceding paragraphs, several properties of ICA becomes obvious

Annex: the math behind whitening

Putting it in mathematical terms, we seek a linear transformation V of the data D such that when P = V*D we now have Cov(P) = I (I being the identity matrix, zeros everywhere and 1s in the Diagonal; Cov being the covariance). It thus means that all the rows of the transformed matrix are uncorrelated (see covariance matrix).

(computing Cx is not an easy process: to simplify it is defined as to achive Cx*C-x = I and involve complex computation such as the determinant of the matrix….)